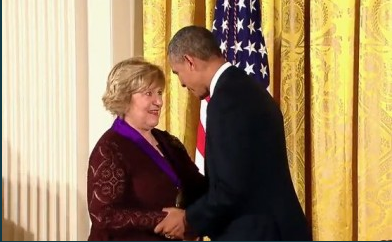 National YoungArts Foundation founder Lin Arison was recently awarded the National Medal of Arts by President Barack Obama for her contributions and dedication to the arts. In addition to YoungArts, Arison founded the New World Symphony, led by Master teacher Michael Tilson Thomas. Arison stated, “I am honored and deeply humbled to have been included among those who received the 2012 National Medal of Arts from President Barack Obama, to me, this award is a testament to the President’s recognition of the incredible work of the next generation of young artists in this country.” The President also honored Renee Fleming, one of the master teachers from season two of the YoungArts MasterClass series.